So far, we have not published any outdoor activities near Amsterdam. That’s actually a pity.

In this cycling tour you will see that even near the capital city of the Netherlands there are exciting rural places to explore. At the end of this tour you will visit a milk machine, where you can tap fresh milk of the day. How cool is that!

The trail starts at Amsterdam Zuid railway station, but you may also start near the official entrance of the Amsterdamse Bos, where you can rent-a-bike. The Amsterdamse Bos, or Amsterdam Forest, is three times the size of New York’s Central Park and is entirely man-made. In response to the challenges of the economic crisis in the 1930’s, the municipality of Amsterdam took firm action. The construction of the forest provided work for 20,000 unemployed people. In 1934 the tree planting started, and the last tree was planted in 1970. Features of the English landscape style are winding streams, curved forest fringes and gently rolling meadows dotted with groves of trees.
The Amsterdamse Bos offers a great variety of sights and activities. An Olympic rowing track offers opportunities for professional rowers. There are 116 bridges, quite a sight for engineers, a sculpture route and an open-air-theatre. The combination of forest, grassland, reed and water results in a great variety on flora and fauna. If you’re lucky you will see kingfishers and grass snakes.

From the start of the route near the Olympic rowing track, one of the first hotspots – not only for engineers – is the old lock Bosbaansluis. This lock has lost its former function, but you can still see the enormous water level difference of about 4 meter, between the water of the Bosbaan and the Nieuwe Meer. From the lock you cycle along Polder Meerzicht, which shows what the landscape of the Amsterdamse Bos looked like before it was re-created by man. You are now heading towards the Goat Farm, a place to eat organic products fresh from the farm. On the other side of the highway, you will pass the first Sint Urbanus church (in the village Bovenkerk). Sint Urbanus was the 17th pope of the Catholic church and five churches have been named after himin The Netherlands . From Bovenkerk until the old part of the city of Amstelveen, you follow the historic electrified tram track. You will also pass the former railway station which was built in 1916. The newer part of Amstelveen is not very exciting. So, take the shortest cycle route heading for the picturesque old town of Ouderkerk, literally meaning “old church”.
In Ouderkerk cross the bridge and via de Dorpsstraat and the Kerkstraat you will find the Amstelkerk and another church named after Sint Urbanus, obviously a popular saint in this region. On your left, you will see the entrance of the oldest Jewish cemetery of the Netherlands, called Beth Haim. This 400 year old cemetery is an interesting stopover. Many gravestones are in Portuguese and belong to families who fled the Iberian Peninsula during the Spanish Inquisition, after which they settled in Amsterdam. Ouderkerk was the first place selected by the municipality where Jews could honour their deaths. Minor Sights describes this place on their travel blog.

After two roundabouts, the Holendrechterweg and the Middenweg, you will see the Ouderkerkerplas on your right. The lake is up to 40 m deep. The cold water is used to operate the climate control system of the Academic Hospital, located on the other side of the lake. Continue and take the first road on the left, which is called Korte Dwarsweg. At number 8, you will find the fresh milk machine, operated by Family Hogenhout. Cees and Marian are running this farm called Panta Rhei, which was built in 1913. Every morning, they fill up the “melk tap” with fresh milk from their cows. The milk is available for € 0,80/liter. The machine provides an important supplementary income for the farm. Have a taste! Next time you buy milk at the grocery store, you will be reminded of this tiny farm near Amsterdam. Now, go to the left on the main road towards Ouderkerk. On the Weldepad you turn right, after which you turn left onto the Molenpad. In English, this would be translated “trail of the mill”. The road leads to windmill De Zwaan, constructed in 1638. The miller receives funding from the Province of North Holland, only when the windmill actually runs. That is why the funding is called an “operating 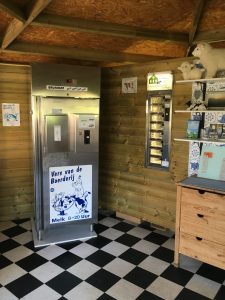 premium” (“draaipremie” in Dutch).
From the windmill, you continue along the River Amstel back to Amsterdam. To cross the river, use ferry de Smient or – if it is not operating – take the Rozenoordbrug. In contrast to windmill De Zwaan, the next mill on your path, Riekermolen, is often running and provides a famous detour for many tourists visiting Amsterdam. Now you are back in the neighbourhood Buitenveldert, which is often seen as one of the less interesting parts of Amsterdam, due to its location outside of the ring road. However, it is one of the greenest neighbourhoods of Amsterdam, given the vicinity of the Amsterdamse Bos and the green corridor connecting it to Amstelpark. Via this green corridor you will end up at the business centre of Amsterdam Zuid or you head back to the main entrance of the Amsterdamse Bos.