It was the most disgusting wine we’d ever tasted. We wouldn’t even use it for cooking, this 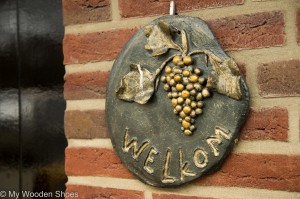 received bottle with a forgotten name. We were sure Dutch winemakers could do better. That is how we became determined to find good home-produced wine. Quick research revealed that one of the Netherlands’ largest vineyards is located in the Twente region. Some of the wines Hof van Twente produces have been awarded at official Dutch wine evaluations. It sounded promising and so we planned a full day in the area.

The train arrived at Delden railway station somewhere mid-morning on a Saturday in March. Delden is a small and lovely town west of Hengelo near the German border. We picked up a rental bicycle and soon we were paddling our way through the town center, towards Twickel castle. This seven centuries old castle is located north of Delden and surrounded by a large estate.

In 1890, the former baron of the castle hired landscape architect Petzold to construct a circular trail (‘Umfassungsweg’) along the diverse landscapes of the Estate. Petzold died one year later, never able to finish his job. It was only in 2011 that enough funds were raised to finish the trail. Hikers nowadays will pass a stone with a plaque commemorating Petzold. The 9 km long hike is truly impressive. We were pleasantly surprised by the stunning landscapes providing an overview of the region’s beauty; park, woodland, pastures, rural hamlets and a board walk through a small area of heath.

Had it not been for our reservation at the winery at 3pm, we would’ve probably taken the whole day to hang around Twickel Estate. At some point along the way, we agreed not to linger every 10 steps to take in the surroundings. We quickly mounted our bicycles, which we had parked in front of the castle, and some twenty minutes later we arrived at the winery in the village of Bentelo.

It turned out cycling was the right option of transportation. After a tour around the vineyard, the wine cellar and the large modern barn where the wines are bottled, we were ushered into a classy tasting room. Tables were set and candles were lit, proving that attention had been paid to receive guests with a warm welcome. The hostess served a number of wines in all colours and explained to us how the tasting is done. Much to our surprise, she even served tomato wine and bell pepper wine. A peculiar taste that some of us enjoyed and others didn’t. Then became clear we were the lucky ones not to have come by car. More than satisfied with the delicious taste of the wines, we purchased a few bottles to take home and singing and swaying we cycled our way back to the railway station.